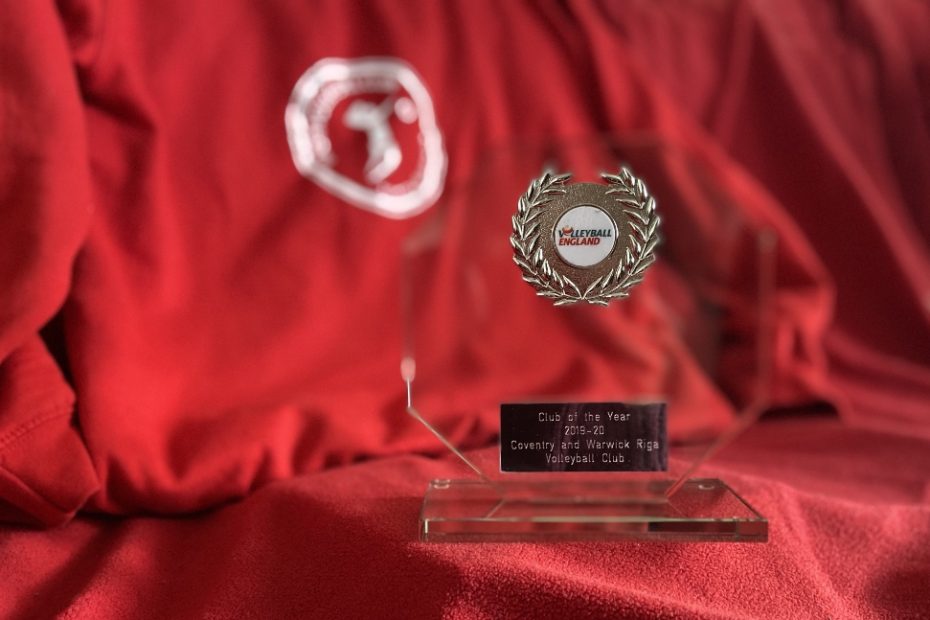 Coventry & Warwick Riga Volleyball Club was announced as the winner of the Huck Nets’ Club of the Year award, part of the Volleyball England Annual National Awards ceremony streamed yesterday evening via social media. The ceremony celebrates the achievements of English volleyball clubs and individuals involved in the sport.

Our club beat Leeds Gorse and Southampton Volleyball Clubs to the award. The judges cited Riga’s efforts to bring more visibility to the sport in the Coventry & Warwick area as well as creating more opportunities for playing volleyball competitively.

Julia Protesaru, Club Secretary at Riga said: “to say this is an achievement is an understatement. We’re a volunteer-based club and to see ourselves recognised in this way is proof of the positive impact our committee members, coaches and all other volunteers involved in running our club have had on volleyball in the Midlands area.”

This award caps off a winning season for the club after last season two of Riga’s competitive teams were promoted to Division 1 and Division 2 of the National Volleyball League following outstanding performances.

Sue Storey, CEO of Volleyball England, said: “A huge congratulations to Coventry & Warwick Riga for being named our ‘Club of the Year’.

“Coventry & Warwick Riga has developed links with local universities, increased junior participation, achieved fantastic results in the National Volleyball League and has very strong governance. Underpinning it all is a thriving band of volunteers who have really gone above and beyond for the club and volleyball in the area.

“This is an immensely sought-after prize and richly deserved by the club and its members for their efforts over the last year.”

The news comes less than two days since the exemptions from the “rule of six” have been cut following an increase in COVID-19 cases. Under 18s are still allowed to continue practicing sports in groups bigger than six people, under strict guidance.

We have recently launched junior sessions aimed at 7-17-year-olds looking to learn volleyball and advance their skills. To join the waiting list for the next term, please use the contact form in the footer of this website to get in touch.